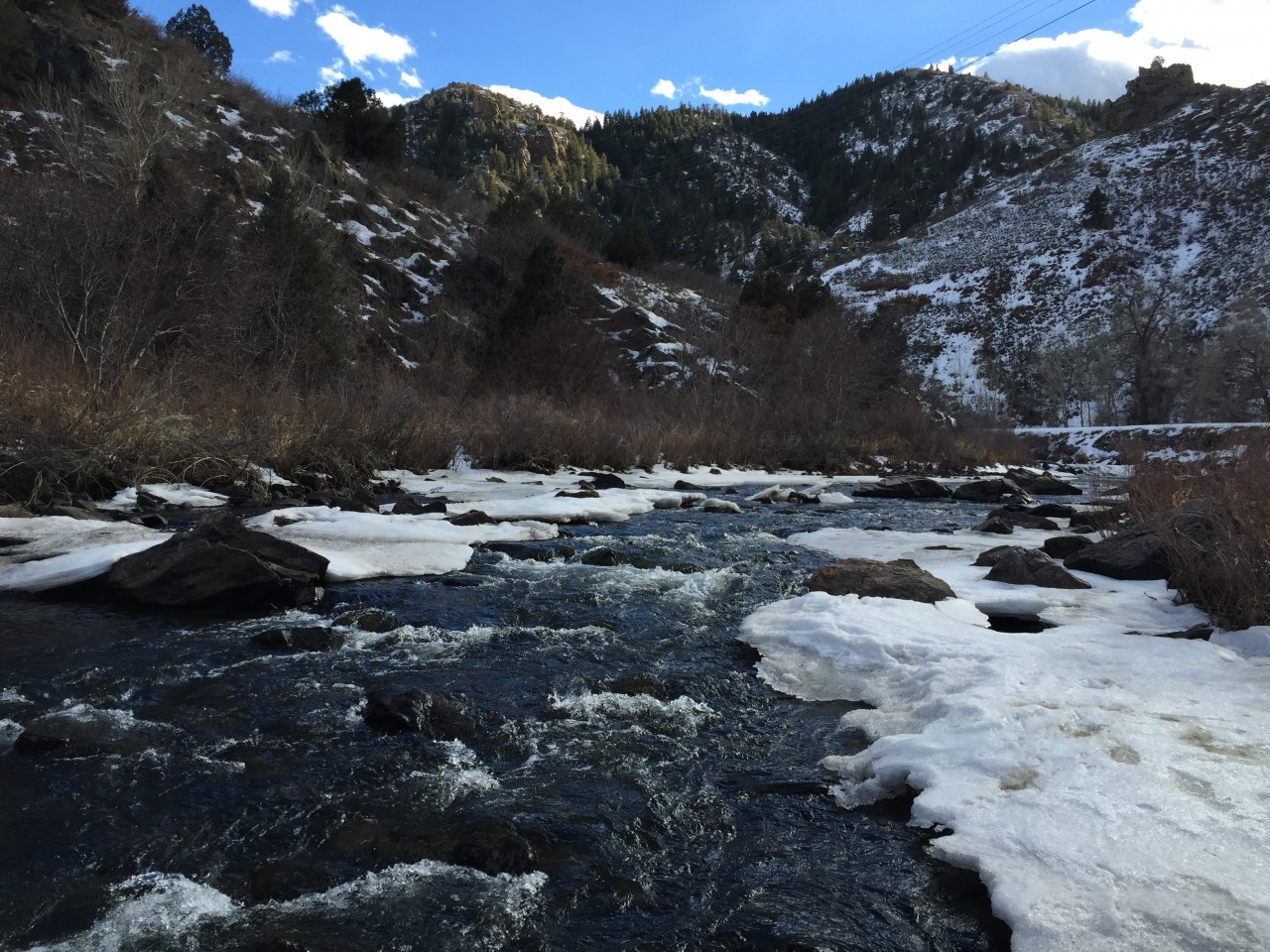 Today was a surprisingly warm day (up around 60!), so I got down to Waterton Canyon for a bit of tenkara. I actually saw more people fishing here today than I have before — probably 6 or 8 people in total I think? I’ve decided that unless I take a bike, it’s probably not worth going to Waterton any more. I’d like to try taking my bike and ride up to Strontia Springs Reservoir (or just below it), because I hear that’s where fishing is best. Without a bike though, it’s just a long trudge along the road to get to some good spots, and it’s not much fun in waders + boots.

Anyway — this was a pretty unfruitful trip. I was fishing straight tenkara, no nymphs or anything, and didn’t catch a thing. I saw 2 dead fish (one pictured below), which is always a shame, and I did see a few live ones here and there, but couldn’t hook anything up. I had trouble finding spots to get into the water as well, between steep banks and ice shelves it just wasn’t that accessible.

I’m a little disillusioned with winter fishing thus far, and might end up giving it a bit of a break until some of the ice melts off. Maybe I’ll make another trip to Deckers, we’ll see.

After finally getting a US driver’s license, I was able to head out on my own and go fishing. I consulted the Colorado Fishing Atlas (more about that in another post) and decided that Kriley Pond in Golden Gate Canyon State Park looked like a decent place to check out. I got up early on a Sunday morning and headed up into the mountains on my first solo drive + fishing trip. Once I got there, I picked up an annual pass to all state parks ($70), and then set out to hit the pond and see what I could come up with.

To make a long story short, I caught absolutely nothing again here. It was more practice on my casting (with a few hookings on the back-cast, because they were rehabilitating the banks of the pond and had that mesh stuff holding it together). I didn’t feel too bad because there was (what looked like) a grand-father, father, son trio who were bait fishing, and I only saw them catch one fish the whole time I was there. The fish were taunting me a bit though, and I saw a few rises here and there which kept me going for a while. There was one dying fish floating near the North-East corner of the pond which was a bit weird (I fished along the North shore, to give the family space on the South-East corner near the parking lot).

After a while of no bites, and it not being particularly interesting to fish a dead-calm pond, I gave up and decided to go for a hike. GGCSP has a bunch of trails, and it was a really nice hike up into the forest a bit. There are some undeveloped campgrounds back up in there that might make for a nice weekender as well (no water/facilities, but a pretty short hike to get up in there).

Nearby (just down the road) Slough Pond might be worth a shot if I head back to this location.