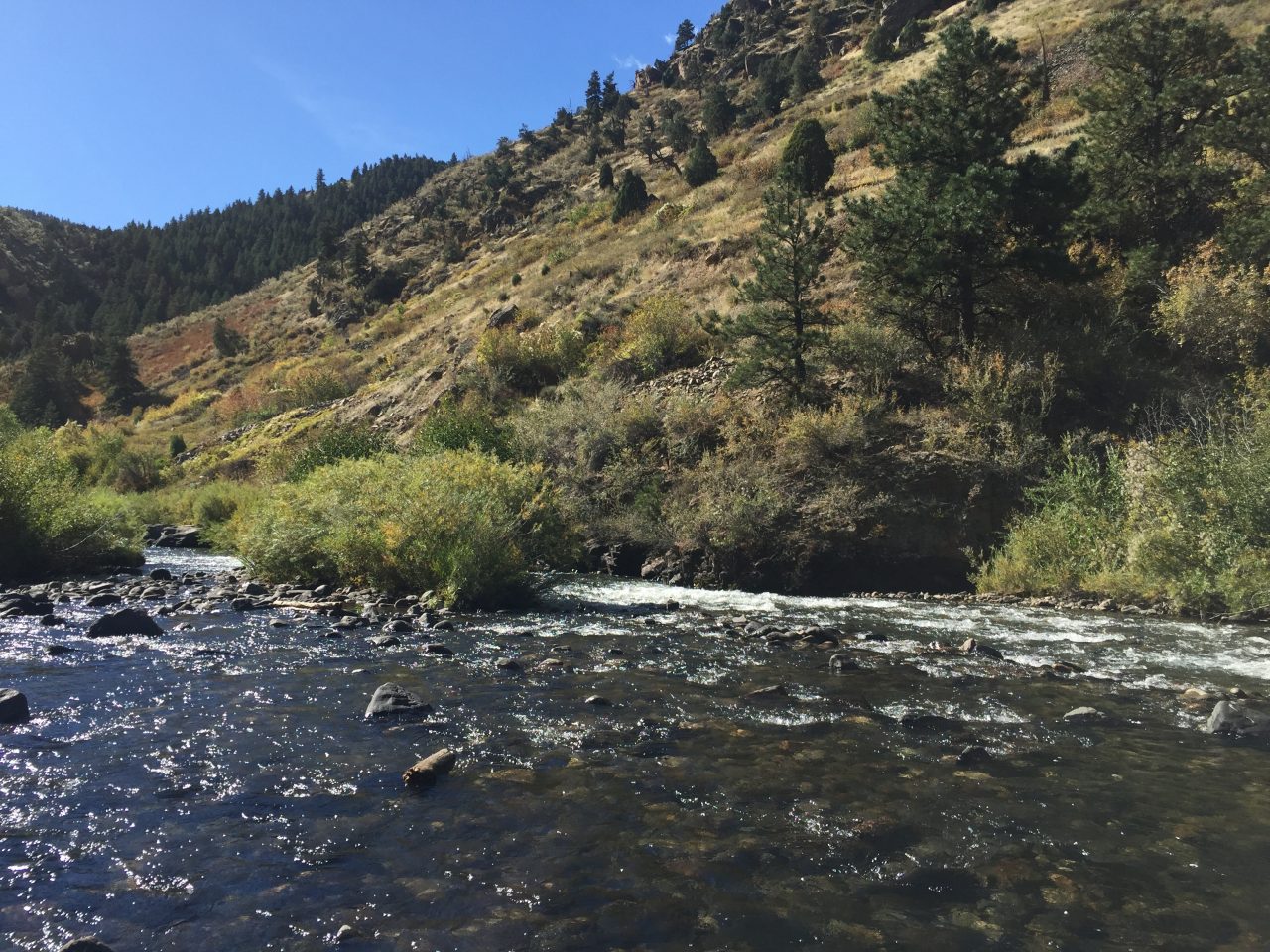 As I mentioned, Erika got me a tenkara rod recently. Between waiting for some tackle to arrive, some travel, and cold weather, today was the first chance I got to actually try it out. It’s Christmas Eve, and here in Colorado that apparently means 50 degree weather. I’m definitely not complaining. I was expecting it to be colder as I gained some elevation, but it was right around 50 up on Clear Creek, and it was actually a pretty nice temp to be fishing in. Definitely a lot more bearable than a few weeks ago when it was closer to 40.

I honestly wasn’t too concerned with catching anything today, which was lucky because I didn’t even see a single fish. I was more interested in getting a feel for the rod, which is really quite different from a “western fly rod”. Because it’s so long, and so light/flexible, the tenkara rod needs barely any effort to cast, and you can place the fly quite precisely (even me, a rank beginner). It took me a few minutes to get a bit of a hang of it, but I think I can handle it reasonably well now. I fished an Amano Kebari, although as I mentioned I didn’t even see anything there. While dropping a nymph (or 2) off of that may have increased my chances of a strike, I wanted to get a decent feel for the “pure form” of tenkara before experimenting a bit more.

Probably my favorite thing about the experience was just how simple the rod is. I was set up (tied on a hook, rigged up the line to the rod) in a few minutes, and was off and running. When I moved from place to place, it was really easy to either wind up the line and collapse the rod, or just keep it as-is if I had a clear path.

As far as the winter side of things goes, I was a bit nervous about the ice shelfs that were everywhere, so that made getting into the water a bit tricky. Once I was in there it was pretty comfortable though, and my waders worked wonderfully. I had thermals and thin track-pants on underneath them, plus some woolen winter socks. I could feel the temp difference, but wasn’t particularly cold. It was definitely a weird experience fishing and having “ice bergs” banging against my legs as they came sliding down the river. I also managed to catch a few ice-cubes to keep things interesting (see below).

With my phone in its new QuadLock case (the second one I’ve owned), I put it on my running band and had it on my upper arm. A bit of a risk, since if I went for a swim it’d definitely be toast, but it did allow me to snap a few pics one-handed, without having to actually juggle my phone and risk dropping it. 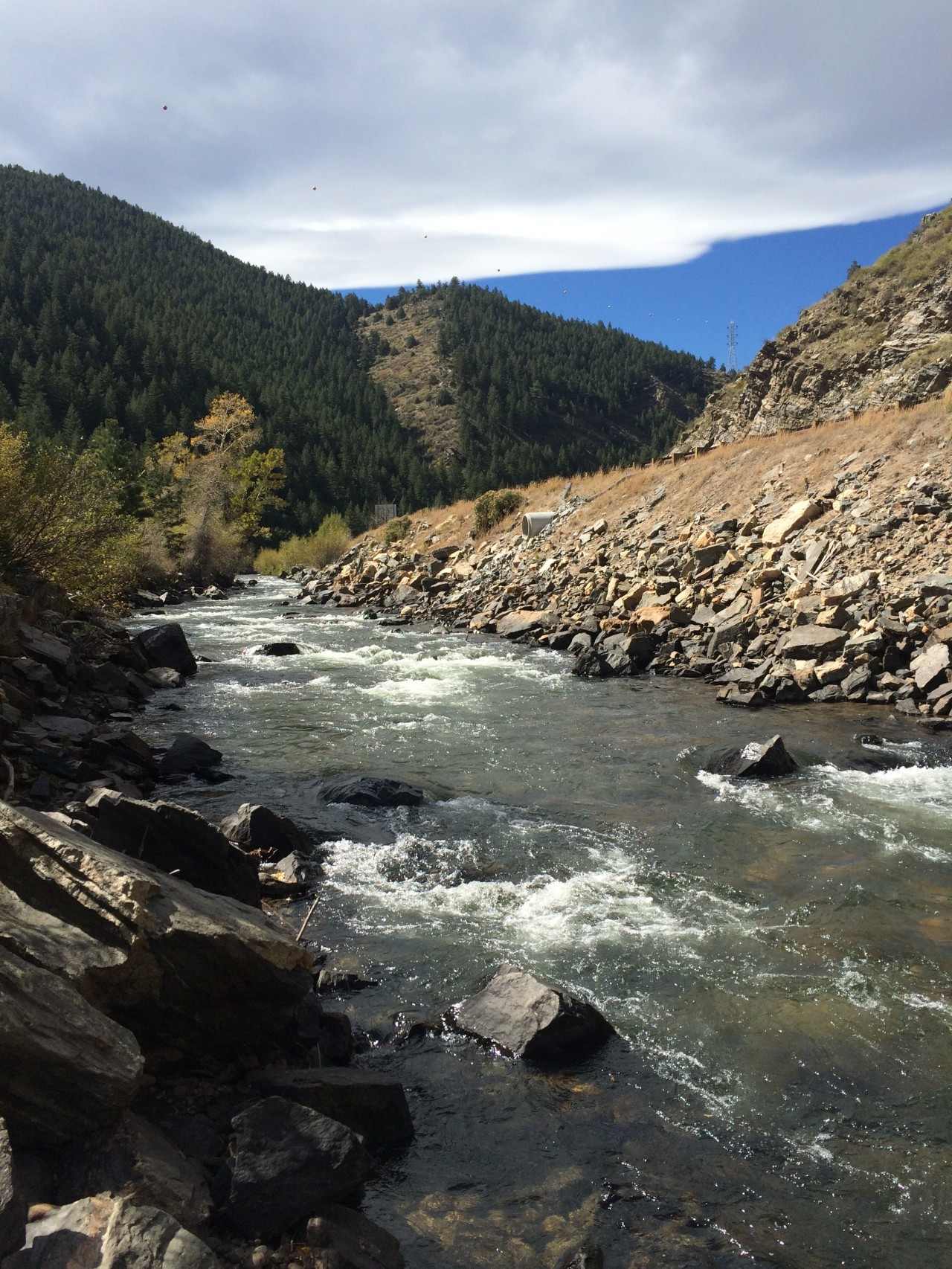 After my last trip to South Platte, where I finally hooked something, I was feeling a bit better about maybe actually landing a fish at some point. My buddy (and brilliant co-worker) Michael mentioned fishing Clear Creek, so I thought I’d go and check it out and see if I could 1. find somewhere new to fish, and 2. actually catch something.

I basically just had a look on Google Maps, then plunked a pin down and got directions to head out there (not too hard — straight out 6th, onto 70 and keep going). When I got off at Central City Parkway however, I missed my turn/stop, and ended up on Central City Parkway itself. I figured I’d just turn around as soon as I found a good spot… which turned out to be Central City, another 9 miles down the road. That place was a bit creepy, so I checked my directions, flipped it around and headed back to where I was supposed to be.

Once I got back to the turn off, I stopped in and grabbed some jerky, and also asked the guy there if he knew of any good fishing in the area. He suggested I could go right behind the shop, or else under the highway and back towards Denver a little on the other side. I went down to the river behind the shop (which looked nice) but it was pretty windy and it seemed like casting would be a nightmare. Heading under the highway and down to the end of the frontage road turned out nicely, and lead me down to the river as it followed along the highway. There was one other angler there who looked a lot better equipped than me (waders, chest-bag etc), so I said hi, wished him luck, then headed off with my pack + rod.

Since I don’t have waders, I was relatively limited as far as where I could get into the creek. There were a few spots though, and when I walked down far enough I found a section where there was a little side-stream, separated from the main current by a long “island”. I managed to get across to it without getting wet, and trawled back and forth a bit working the smaller stream, trying to pick out a couple smaller fish I could see in there. They proved too sneaky for me though (and it was really hard to get a rod in there without getting tangled in the low trees).

Eventually I gave up there and went for a bit of a walk. I spotted a few fish in different places, but couldn’t for the life of me get a bite. Not a single nibble. I tried a dry-dropper rig and a straight dry fly, but couldn’t get anything to happen. I even spent a really frustrating period (mid afternoon) trawling through a group of rising, heavy-feeding fish, and couldn’t tempt a single one to take a fly. When I was packing up, out of interest, I even put my rod in the water and touched one of them — that’s how intent they were on feeding. I’m not sure what I was doing wrong there, but I guess I either didn’t have the right fly, or just wasn’t presenting it in a way that interested those fish. Frustrating.